Happy Birthday to Me - and then a Devil Dies in Pakistan

I was going to write about my birthday.  About Karen rallying the troops this morning, and getting kisses and birthday wishes from my girls.  About all of us going to the Alameda Point Antiques Fair.  About how it was a glorious day by the San Francisco Bay.  About how the girls each had five dollars of their own to spend at the Fair (can you say Barbies?)  About how I found a terrific Zippo, one that looked brand new but one that was made in 1966.  You know, the year of my birth.  Stamped on the side with the words Pacific Telephone.  Or the other find I made - you can find anything at Michaan's Antiques on the point.  Even stuff you didn't know you were looking for.

Case in point?  I've got a collection of small, antique bottles collecting on our front porch.  Little bottles that can hold a single, slim stem from one of the flowers blooming in our yard.  The largest of the bottles can hold a rose, but most are so small they can only accommodate something like a lavender bloom.  Maybe a flower from one of our azaleas.  And today I found a great addition to that cluster of bottles.  This one?  Square, about two inches high.  Amber glass with raised letters on one side - BOERICKE & SCHRECK SAN FRANCISCO.  Perfect to hold a delicate flower for Karen.

I want the bottle because it's so old - the pharmacy, Boericke and Schreck, originated in 1882 - but also because it's just so pretty glinting in the afternoon sun.  The amber glass has a rainbow sheen when the light hits it.

But while I'm looking at that bottle, I see another.  Round like the moon, but flat.  The glass is beautifully pebbled with air pockets trapped like insects in amber.

That's a pumpkin-seed flask, the dealer tells me.

A flask? I repeat.  The dealer's a little guy in blue sneakers, blue jeans.  Yes, he says.  That would have been sold in a saloon to a customer who was headed out the door but wanted a little nip to go.  See how this side - and he takes the bottle from my hand - see how it has a slight curve to it?  Perfect to fit in your pocket.

This - I say - this is a hip flask?  Sold on the Barbary Coast?  And the dealer in blue just smiles at me.

Suddenly, not only do I want this flask - suddenly, I need this flask.  And on my birthday, I'm going to buy it, and the teeny bottle for Karen.  My bottle?  I'll wash it this afternoon, my hands wet with suds and hot water.  I'll buy a bag full of corks at the craft store, the bag holding four corks each of four different sizes.  I'll pour some whiskey, or some mash, into that beautifully pebbled glass flask, stopper it with one of my new corks.  Hold the glass up to the light.  Watch how that light plays with the whiskey inside.

Do you remember September 11th?  Do you remember how you felt?  How the world felt?  I was at work.  Paulina was setting up early at the bar next door, at Delaney's.  She had the tv's going.  People were stupefied.  Dumbstruck.  I didn't know what to do about the bookstore.  Should I close for the day?  It seemed - at first blush - crass to stay open.  I decided, though, not to close the doors.

No one much came into the store at first, so we were all just talking to each other.  Running next door to catch the images - those horrible images - on the televisions high on the walls in Delaney's.  But then slowly.  Slowly but surely.  People started coming into the store.  Not customers.  These were neighbors.  Friends.  Not exchanging money for books.  But Americans sharing time - spending time with other Americans.  Remember how proud, how angry and proud we all were to call ourselves Americans?

That was the best day and night we ever had at the bookstore there on Chestnut Street in San Francisco.  Not because of the money we made.  I don't think we made any money, really, that day.  But because that day, as the shock sunk in, people sought out a place to gather.  A place to talk.  To share.  And we were there for that.  To become a nexus.  To become a core of Americans - even the couple from France were Americans that day.  We are Americans today, the woman said in her beautiful French accent.  Hugging me as she cried.  She smelled of dusty lilacs - such an old perfume for such a young Frenchwoman, a Frenchwoman in black tights and a clingy top.  A Frenchwoman who had come into the store to buy a copy of L'Equipe for her husband who was drinking espresso across the street at the Grove.

We are Americans today, she said.  All of us.  And it didn't sound foolish or silly or wrong.  Because, that day, we were all Americans.

And then tonight - tonight.  Almost ten years later.  How many wars and lives later?  I saw a banner online.  Clicked through.  Walked out onto the floor of the bookstore and said, in my outside voice, Folks - it's just been announced that Osama bin Laden has been killed by the United States.  We're in possession of his body and the President will address the nation in a few minutes.

Chills, Jerry said.  I've got chills.  Are you serious?  It's like hearing that they killed Hitler.

Wait, what else are they saying? this guy called out, a guy sitting on the bench in front of our magazines.

You know everything I know, I said.  I'll keep you updated if I hear anything more - like the rumors the radio started broadcasting in those few minutes before the President spoke.  The operation took place last week, we were told.  The body of bin Laden buried at sea days ago, they reported.

None true, none true.

But once again, ten years later, the bookstore became a gathering place, a place to share incredulity and shock.  The reactions were tempered this time - tempered by ten years of attacks.  Ten years of killings.  Ten years of feelings that swung from We are Americans today to -

Feelings have swung from those united feelings of anguish and anger to something often uglier.  Often directed towards us.  Some say we squandered the good will we had garnered, squandered it with American arrogance and American violence.  Others said and continue to say that we did not seek out the violence, but that when it was visited upon us we had no choice but to respond.  And that when your opponent pulls a knife you should of course pull a gun. 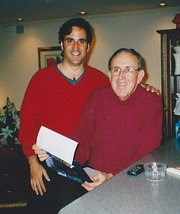 Ten years.  Long time to stay mad.  But I'm Greek - I know all about grudges.

So if you ask me, right now, is it just or right to have killed bin Laden?  To have hunted him, pinpointed his whereabouts,  ordered his execution?

Right now?  Right now I'm thinking about my thoughts ten years ago.  My disbelief.  The numbness.  Then outrage.  The knowledge that the hunted man, ten years ago, wept with joy as each plane hit the Towers and exulted - after each impact - God is great.  The Devil may even have danced.  Do you remember that?  Some even said the Devil danced that day.

I'll think about that Tuesday, think about New York City firefighters rushing up those towers as everyone else rushed down.  Men and women fearlessly doing their jobs on September 11th, 2001.

Want to know the image that sticks with me?  Not the plane hitting the second tower.  Not the ash-covered denizens of New York fleeing Ground Zero.  It's the picture of two people, forever unknown,  hands clasped, jumping together from the North Tower.  Jumping out of a window 100 floors up.  Holding hands, touching another human for just ten more seconds - forced to make a harrowing decision.  Not whether to die, but how.  Two people holding each other, fingers entwined - seeking brief comfort there - before taking that awful step away from the heat and into oblivion.  So tonight, right now, when you ask if justice was done?

My answer is yes.

It might be different tomorrow.  Hell, before I had children, I had convinced myself that capital punishment was wrong.  So maybe the rational Nick talks me out of my feelings tonight.  But tonight?  Tonight I'm going to go home.  I'm going to lift a flask that I bought, cleaned and filled this afternoon and I'm going to drink.  Mainly, I'm going to drink because it's my birthday and I'll toast myself and my good fortune.  I'll think of my wife and my daughters, my family and friends.  Those here, and those who have passed.  Because this is what I do on my birthday.