Fall's coming, and your drinks should reflect that.  I mean, go right ahead and enjoy your Gin and Tonics in October, but when the leaves outside begin to turn and the flames inside your fireplace start popping, savory cocktails will respond perfectly to those autumnal clues. 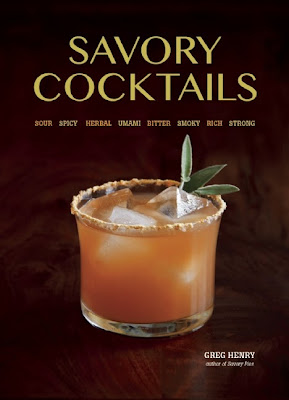 Henry is the author of Savory Pies - and now he's brought his palate and eye (his photographs in the books are stunning) to the bar.

Savory Cocktails is perfect for the novice drink mixer - with brief introductions to glassware, tools and techniques, but more experienced drink wizards will revel in his delectable recipes.

Don't think an heirloom tomato belongs in a cocktail? Just wait until you taste his Salad Bowl Gin and Tonic.  Horseradish and cucumber?  Try out his Breeder's Cup.

The drinks are grouped in categories like Herbal, Umami, and Smoky.  I went with Smoky.

My first selection was the Autumn Ash.  I hadn't had Scotch in a while - bourbon and rye have taken over my bar - but the smoky notes to the Ash caught my eye.  And while Henry calls for a blended scotch in this drink, I went with Glenfiddich because I had a bottle (and incurred the wrath of a friend who intoned that I had sullied the Glenfiddich and where did I get off thinking this type of heresy should be allowed?)

Still, it made for a delightful drink, so there's that.


AUTUMN ASH
2 oz. Glenfiddich (or a blended scotch whiskey to keep my friend Al off your back)
1 oz. Laird's Applejack
.25 oz. St. Germain elderflower liqueur
2 dashes Angostura orange bitters
Combine the scotch, apple brandy, liqueur﻿ and bitters with ice.  Stir.
Strain into a chilled cocktail glass.  Squeeze a lemon twist over the drink, rub it on the glass' rim, and use as garnish.

Shave and a Haircut 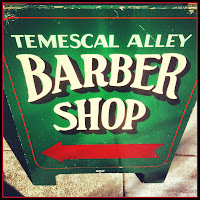 Bad hair day doesn't begin to cut it, so I had to cut it.  I had Shirley-Temple curls, Alfalfa sprouts - I was a mess.  So much so, that when I picked up the kids for their first Daddy Day of the new school year, Daughter #1 said, from the backseat...

Daddy, you need a haircut.

...and simultaneously, from Daughter #2:

You need a haircut, Daddy.

Which is unanimous and so off we went to a Barber Shop of My Own.

The Temescal Alley Barber Shop is old-school in the ridiculously hipster way people use the term.  No sinks for washing scalps - you come in clean.  A barber-pole outside.  Hex tile floors inside.

The one major change is that among the gents cutting hair there's usually one gal.  So this isn't your grandfather's barbershop, but he'd approve. 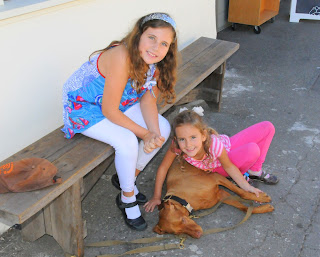 So we park right across the street, on 49th, and then I put my name on the barber-shop's chalkboard.

Lots of hair on the floor, Daddy, Kristina says - and I say, Yes.  That happens in Barber Shops.  She just shakes her head.

While waiting, we check out the offerings in the Alley's other shops - super-expensive pants, hot hot coffee, succulents and dried sage.

Elizabeth picks up a bundle of that dried sage inside Homestead Apothecary and breathes in its earthy smell.  Ooh, I like that, she says.

A young customer inside has tats - everyone's got tats, or piercings, or both, and as I'm feeling especially like a citizen of Squares Ville, I hear my name called out by the young man who wrote it on the chalkboard earlier.

The girls decide to sit outside, in the shade (which is a relief on this hot August afternoon), and pet the dog stretched out under their bench.


I go inside and take a belt of the Bulleit they have on a high shelf.  It goes down all spicy, orangey, and sweet.  Since I was last here, the shop's front door got moved - but more importantly, the bourbon and rye got moved, too, from the low bottom shelf of a cabinet to this high shelf on the wall. 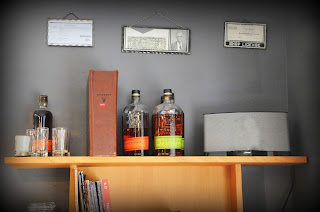 I sit and my barber just looks at the unruly mop I offer once I take off my Giants' cap.

My guy tells me that his #1 son is a big reader, like his mom.  Began by eating pulpy board books, as good readers should, and lit off from there.
﻿﻿
Then he tells the young man at the door that he's ready for a drink.  A Shebang? the young man offers.  No, my guy says, the Whole Shebang.

Another of the barbers looks at the clock - a few minutes before three - and says that's it's also time for him to have a Whole Shebang.

What's a Whole Shebang? I say.

My guy pauses as he clips.  You're probably hoping it's got something inside that's high-octane, he says and laughs.

I was hoping that, yes.

You've had a shot yourself, right? and he points to the high shelf.  Magazines up there, too, he says.

A Shebang, he says, will disappoint you then.  It's just Gatorade--

Original, I say?  Not purple or blue?

Original, yes, he says.  Yellow.  But a Whole Shebang is the Gatorade and Red Bull.  It's a good boost late in the afternoon.  Especially a hot afternoon like today.

So the young man leaves, and as he closes the door some of the hair on the tile floor does a little breeze-shift.  Lot of hair down there, I say.  My daughter thought it was funny, all the hair.

One of the other barbers, the guy who's in on the Whole-Shebang - his apron is leather, smooth like the skin on his scalp - shakes his head.  That would be the Apprentice's fault, he says.  There isn't supposed to be any hair on the floor.

Actually, my guy says, it's not supposed to even touch the floor.  He should catch it as it falls.

Fat chance, says the young barber - pretty and tattooed - who's just to our left.  But she's laughing as she says it.  Lots of laughs from this crew.

The bald barber looks my way.  First week of school for your kids? he says.  What grades?

Fourth and First, I say.

First grade, he says, and he scowls.  I fucking hated First Grade.  I got suspended on the first day of First Grade.

I didn't even know that was possible, my guy says.

I threw a chair at a kid, he says as he runs his fingers through the hair of the guy he's cutting on - checking to see if the ends are straight.  He deserved it, though, he says.

Lots of laughs at that.

And I went through all the steps to prevent it, he says.  I told the teacher three times that this kid was bugging me--

So you're a snitch in addition to being a truant? the pretty barber says without pausing as she combs through her customer's hair.

--I'm telling you, I tried letting the teacher know what was going on, but she just kept telling me to sit down, so I finally took matters into my own hands.  Taught him a lesson, too.

What was the provocation? I say.

He looks at me and says, all sotto voce, I didn't want to say this out loud - it's because I was crying.  I missed my mom, bad, and I'd been crying all day and this kid, man.  He just kept going at me, you know?  Just kept going at me.

Wow, the pretty barber says, you've got a lot going on, huh?  Terrible student, violent, and mommy issues, too. 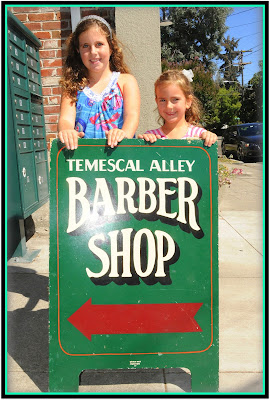 It's about this time that my guy drapes a hot towel around my neck - I always thought that getting my hair washed when I got it cut was the best feeling, but let me tell you, that hot towel?  As a prelude to getting the back of your neck shaved with a straight razor?  That's pretty great.

So he shaves me, and brushes me off, then whips the smock off like a matador.  How's that look? he asks as he swivels my chair around so I can get a look in the mirror.

Like a new man, the pretty barber says, and I smile at that because, yes - the curls are gone, the sprouts have been sheared, and I've got a shot of Bulleit in me and another story to tell.

Looks great, I say, and I tip my guy and go.

The girls are ready to head out, so we load up in the car and put Alameda in our sights.