Sometimes the universe speaks - and when it does, you need to listen.

This wonderful post﻿ dropped into my lap two days ago.  It concerns Dusty Hunting - a term unknown to me.  If you Google it, you'll find lots of hits about women who go into nail salons looking for old nail polish.  The little jars no longer glistening because of the dust covering them - but sought after nonetheless by searchers looking for discontinued colors.

Greg, though - and I don't know Greg, not yet, but I revere him all the same - Greg was a Dusty Hunter of another sort.  Greg travels to old-school liquor stores seeking out whiskey - bourbon and rye - that was bottled years ago but that never found a home.

I couldn't quite believe what I was reading.  Greg said that he detoured into Baltimore, hitting a few dozen liquor stores, and there they were:
A bottle of Old Overholt Rye, from 1968.
Bottles of Old Forester from the 1970's, others from the mid sixties.
J.T.S. Brown Kentucky Bourbon from 1969.
These were just a few of the treasures he found that day - and the world of Dusty Hunting suddenly opened up to me.
Could this be true?  It couldn't be true.  I couldn't just walk into a liquor store and find something bottled before I was born (1966), some delicious treat that had been unpacked before we walked on the moon, placed on a shelf, placed on another shelf, the shelves getting lower and dirtier as the years went by?
But here was more proof posted by my new friend Greg.
There's a certain tingling I get when I know something is going to please me - the first time I went to a speech tournament in high school, crutching up to the podium, dragging a shattered leg behind me.  Doing terribly.  The worst speaker to take any stage in 1980.  But even then I knew I was going to like it, later.
Baseball - that first professional game we saw.  The Modesto Reds.  Tingle tingle.
Well, let me tell you, Greg got my spidey-sense tingling.
There's a liquor store - the Pit Stop Market - up the street from the bookstore.  Tracy needed some Everclear because she's trying to concoct some bitters for a Bad Monkey cocktail we're devising (more on that later.)  So I thought I'd kill two boozy birds with one stone and I took a walk.
The Pit Stop must be the kind of place Greg would be drawn to.  Shabby on the outside, most of its windows screened with ads for Newport and Marlboro.  A Bud Light sign in another window, the Silver and Black Raider staring out at you with his one good eye, the words One Nation One Beer underneath.
I'd been inside before, but never on a Dusty Hunt.
What do you look for?  What are the broken twigs, the signs of scat, the trail markings that a Dusty Hunter seeks?
Dusty bottles, number one.  And then tax stamps.  Remember those?  Affixed to the top of the bottle?  Green if it was bonded whiskey, red for other hooch.
Look at how the liquid is measured.  Anything in ounces is good.  4/5 of a quart?  Gold.  There were a few years when bottles had both metric and US Standard measurements - some sources say it was only 1979-80.  Others say mid-70's to early 80's.  Either way, if you've got a dusty bottle with both measures, she's an old one.
So I walk into the Pit Stop.  The woman behind the counter can't be bothered - she's yakking on her phone.  Like many such establishments, the hard stuff is behind the counter.  I scan the shelves and see four bottles of Everclear - 151 proof.  Lots of vodka.  Cheap whiskey.
And there, on the bottom shelf, almost at the end - two old bottles.  Black and White Scotch Whisky. 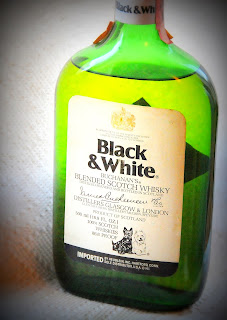 She looks at me like it's a hold-up - and I'm certain the Pit has had its fair share of those.  Why you want do that? she says.  No, she says, I'm busy.  And she goes back to yakking.
I ask if I can buy two bottles of her Everclear and she perks up.  Sure, sure, she says.  Why you no say?  And she smiles.  So then I ask if I can take that peak around the counter.  Quick quick, she says.  I'm busy.  But she's still smiling.
The first thing that started the tingle was the tax stamp. 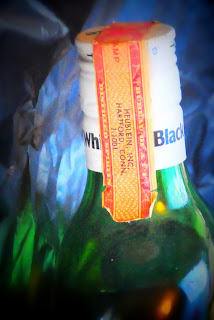 Tax stamps - those wonderful relics that progress and bar codes made obsolete.  So first, that - and now, with the smaller of the two bottles in hand, I see how the scotch is measured:  500 ml (16.9 FL. OZ.)
Is my first Dusty Hunt a success?  It has to be.  The bottle and the scotch are old.  It's not whiskey, it's not Old Fitzgerald Bottled in Bond, but it's pretty.  There's that.  And I remember seeing those two scotties from when I was a kid - I don't think my dad ever touched the stuff, so maybe it's just the memory a little boy filed away, maybe from Modesto Liquors - a little boy drawn to the cute little doggies on the label. 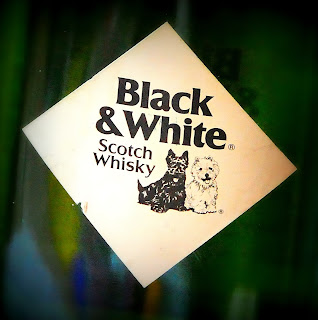 I buy it, of course.  Just the small bottle, though, not the bigger.  If it was bourbon, yes.  If rye, yes.  But I'll call off the dogs from the dogs.  One bottle is enough.
I hand the woman the bottle of Black & White.  Ooh, look at that, she says.  That old label, very old.  And she happily adds $13.98 to my purchase.
Back at the store, I give Tracy her Everclear.  The two bottles should be enough.  Then I show her the trophy from my hunt, tell her how I bagged those two doggies.
There's another mini mart that I pass on my way home.  Bonfare Market - Fine Foods Fast.  Should I push my luck?
Of course I should.
I walk past the blaring orange lights trumpeting how many millions are available to the California Lottery's next lucky winner.
Inside, more shelves, more booze.
Down low, right?  It's gotta be down low again - and sure enough, on that bottom shelf, there's a dusty bottle being used to prop up an empty frame.  The bottle has the red tax stamp I'm looking for.
And in my hands, with both measures of volume on the label, I hold a bottle of DeKuyper Creme de Cacao.
Like a hunter looking through his scope, taking the measure of the buck that he's tracked, there comes that moment when you have to decide whether or not to pull the trigger.
She's an old animal, this Cacao.  For sure.  But I'm not pulling the trigger.  I put her back where I found her.  Clap my hands loud - to scare her off, to let her know that I could have had her if I wanted, but she's not for me.
Maybe some other Dusty Hunter with a thirst for something chocolaty will find this treasure.
I'll leave it at that.
I'll leave it at that because I know I've got some dusty bottles at home - bottles from my dad's stash that my mom distributed after he died.  I know more than a couple have red stamps. 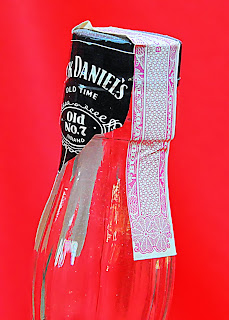 I know that there's at least that bottle of Jack.  Unopened.  That my dad must have gotten around the time I was crutching up to that first podium, around the time Queen was singing about Another One Biting the Dust.
So I'm headed home, successful from my first forays into Dusty Hunting.  Eager to see what my own stashes hold - and what the Bay Area has to offer. 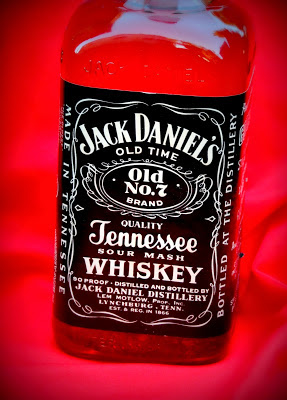