The Amazing Shoes of Brian Selznick

When last we met, I was telling you about the astounding night we had at the Alameda Theatre celebrating the release of Wonderstruck - the latest and most spectacular offering from Brian Selznick.  In my telling, I mentioned that Daughter Number One was miffed that I hadn't take a snap of Mr. Selznick's shoes.  And once I had described them fully - in all their spectacular, shiny silverness - Daughter Number Two was equally as miffed as Number One.

If the shoes were so splendorous, how could I not have memorialized them in film?  I had my camera, yes?  If it failed me, was my phone not in my pocket?  Could it not have been used - easily, with alacrity - to document the footwear's greatness?

I hesitate to say my girls doubted the truthfulness of their father, but perhaps they began to lean towards the camp of those who suggest I am prone to exaggeration.

Anyway - after recounting my daughter's disappointment in that earlier posting, I included a plea to Mr. Selznick.  Asking (beseeching?) that if he, you know, wasn't busy flying to Rome for the premier of the film adaptation of his Caldecott-winning Invention of Hugo Cabret, maybe he could, um, take a picture of his shoes.  If there wasn't anything else on his soon-to-be-spaghetti-filled plate.

When in Rome, and all that.

I was kidding, kind of.  But I did mention that Charisse, Scholastic's Executive Director of Publicity - who was good enough to join us in Alameda for our Wonderstruck night - I did perhaps hint that Ms. Charisse knew where to find me.

I digress.  And for that - not for exaggeration, mind you, but for digression? - yes, I will admit that sometimes I digress.  Because all I wanted to say was this:  not 24 hours after my entreaty was thrown to the wind, I received a response from Ms. Charisse.

So, yes, Virginia, there is a Santa Claus.  And in my house, he goes by the name of jolly old Selznick.


Ladies and gentlemen, may I present to you his Very Amazing Shoes: 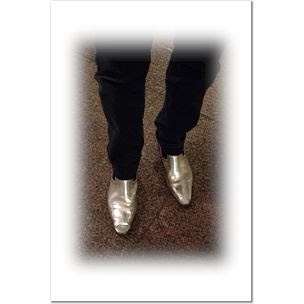