Back home - the girl's first home, we're talking about Alameda - we used to do Treasure Hunts.  I'd leave a silly start to a poem lying around to be found by Daughter #1 or #2.  The poem held a clue - it showed you where you could find the next verse if you could figure out the hints.

There would be three or four stanzas.  At the end of each, the girls would have to decipher where the next lines lay.  Upstairs or down - basement and outside.  Garage and bush - the words would lead the girls hither and yon.  The point, mainly, was just to have fun.  But there always was Treasure to be found - a pot of gold at the end of my poetic rainbow.  Sparkly crystals, antique sleigh bells - the Treasures were baubles, hopefully with a bit of whimsy attached.  It was ridiculous - but the girls looked forward to the next Hunt.

Then?  Then we moved and it's been busy.  Finding a new job, getting the girls settled in new schools, setting up a new home - that all took time, dreaded time.  And the Treasure Hunts disappeared.  Were a thing consigned to our California past.

Until last night.  When the bad poetry came back - forced rhymes or where sometimes the meter doesn't quite sound right.  But the quality of the poems was never the defining feature of our Treasure Hunts.  It was for the fun - fun was the reason.  And we needed some fun around here.

Below, I offer you the words that the girls followed - of course, you won't get all the clues because you don't live here in this house in Newton, Massachusetts.  But I think you'll get the point if not all my direction.

Oh, my goodness! Oh, my gracious!

A year has passed, how outrageous!

Treasure Hunts used to be

Something to count on, don't you see?

But now, more than a year has passed.

It is, indeed, rather unfortunate

So let us go hunting for some ornaments!

First will be Mommy's, because mommies rule

And, as you know, Mommy's gorgeous and cool

But what ornament for someone who's never loudest?

I don't know - perhaps something cute like a flautist?

But golly, where should you both look?

You won't find the answer in a guidebook

Well, since it's winter, heat is what you're after

So run to its source, but leave time for laughter!

And of course since you're laughing while on the run

Be careful, don't fall, because the heater holds fun

Oh, look, you found it!   The first treasure that was hid

So fast you both are, your parents you outdid 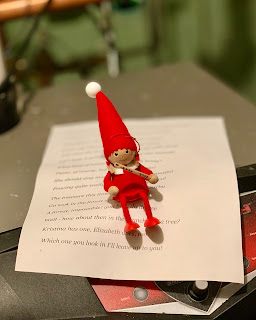 If you say 'Elizabeth' you'll be in the know

And since the first treasure had to do with music

Let's keep going with something acoustic

What kind of music does Elizabeth bring?

Piano, of course, but oh, how she sings!

She should sing more, her voice is so beautiful

Proving quite easily that the girl is musical

The treasure this time is not hiding nearby

Go look in the forest upstairs so high

A forest, impossible! you both do decree

Well - how about then in the branches of a tree?

Kristina has one, Elizabeth does, too

Which one you look in I'll leave up to you!

Well, you've now found two of the four that were hiding 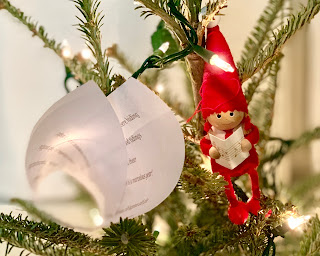 The next that you find will continue good tidings

Kristina's is next, so full of good cheer

There's no doubt in store is a marvelous year!

So graceful she moves,
with happiness with glee

Over the snow she does slide shouting whoopee

If there's an athlete among us, it's Kristina for sure

Her love of gymnastics we're sure will endure

Her treasure, I felt, should show her strong active side

To find it please look in a room that is freezing

If you stayed there you'd end up so cold and wheezing

Look in the yellow, and inside you will find

One treasure is left, yes, one more has been hidden

It's for poor Daddy whose back has left him bedridden

All the ornaments so far have been cute have been pretty 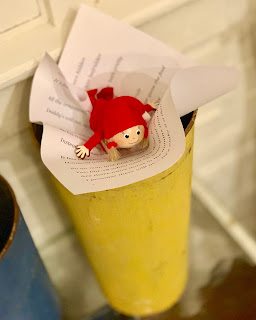 Daddy's will not, as decided by committee

Because he's not gorgeous, nor beautiful as a rule

So his treasure will expose not his ease or his grace

Instead it will show him falling flat on his face!

It has been put inside a stocking with care

Hanging with the others, yes hanging, I swear!

Yes, bid '18 adieu with all your good cheer!

Are there more hunts in the months that do wait?

I promise there will be – let's make it a date! 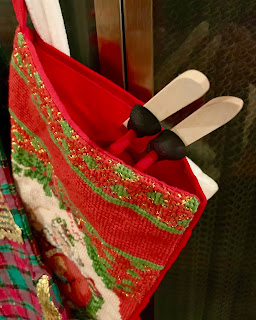 And that, my friends, is how we do a Treasure Hunt in the Petrulakis House.  Cheers to you and Merry Christmas!
Posted by Nicky P. at 2:19 PM