The Reverend and the Archbishop 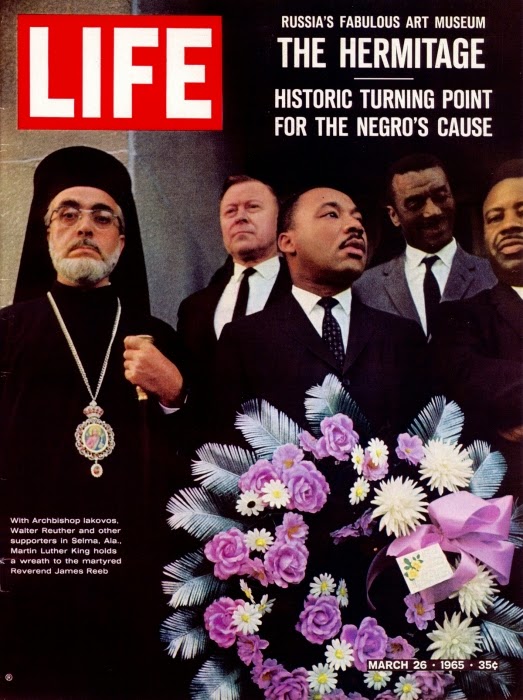 As Martin Luther King, Jr. Day is celebrated, please tell me you've seen the cover of Life Magazine from March 26th, 1965 - it's one of the issues commemorating the Selma to Montgomery marches.  The cover image has always been compelling and powerful since, as Life proclaimed, it was a historic turning point for the cause.  But for me it has also represented a point of pride because, as an American with strong ties to my Greek heritage, it's gratifying to recognize Archbishop Iakovos standing just to the right of Dr. King.

The Archbishop - Primate of the Greek Orthodox Archdiocese of North and South America - was one of the few non-African American members of the clergy who had the courage to answer Dr. King's call and march through Alabama in support of civil rights.

That image is the most well known, with the Archbishop looking into the camera's lens.  But another image, less famous, better captures the feeling of time, of place. 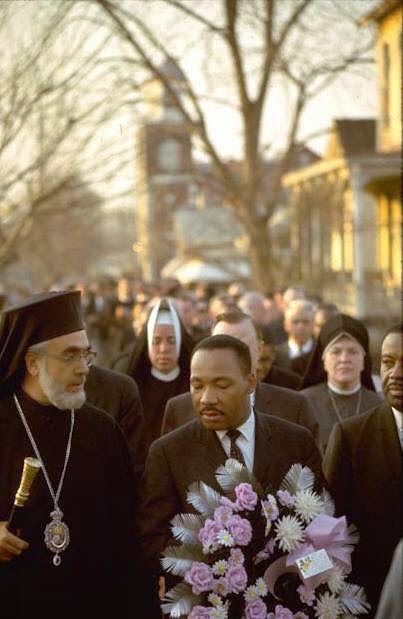 What it doesn't capture, of course, is the horror of that time and of that place.  It doesn't display the hundreds of earlier marchers who had tried to cross the Edmund Pettus Bridge that same month and were attacked by state troopers armed with billy clubs and tear gas.  It doesn't broadcast the murder of Jimmie Lee Jackson, or of James Reeb, two men guilty of trying to march in the South and who paid for their guilt with their lives.

What it does reveal is the tension and sorrow of Archbishop Iakovos and of Dr. Martin Luther King, Jr. and of the long line of marchers behind them.  It reveals the uneasy awareness that though their cause be just, there were men who would rather see them dead than marching under a southern sun.  Dr. King was more aware of this than anyone because the threats to his life came ugly and often.  It's that troubled awareness that strikes me in the second photograph, as if the wreath he carries in memory of the martyred Reverend James Reeb were a shield of flowers.

And so even if it doesn't show everything, it shows that.


Years ago I happened across a copy of Life Magazine - three issues after the one that covered Selma - from April 16th, 1965.  Its Letters to the Editors were featured on page 21.  In the middle of those columns is a short missive from J. H. Sprague of Dallas, Texas, referring to the earlier edition.  It's adorable:

That cover takes the cake.  It's the best evidence of left-wing trouble makers you could ever get together.

Now, while it is true that Dr. King could be characterized as left-leaning, and while it is even more true that Walter Reuther, seen standing in back of and between the good Doctor and the Archbishop, could definitely be described as left of center (he was a Socialist in the '30's and a strong Labor Union Leader later in his life) it's funny for someone as theologically conservative as the Archbishop to be called left-wing.  But Mr. Sprague's ilk is made comfortable when they can put the Other in a derogatory box, so more power to you, Mr. Sprague, you silly, silly man.


Tonight, Karen and I talked about that to our girls, then showed them Dr. King's last speech.  Listen to his words.  Listen.  Listen and know that the threats that came to him ugly and often would turn deadly less than twenty-four hours later.  Elizabeth's eyes grew wet, as did ours, because she, unlike Dr. King, knew exactly what was going to happen to this man the next day.

Well, I don't know what will happen now.  We've got some difficult days ahead.  But it really doesn't matter with me now, because I've been to the mountaintop.

Like anybody, I would like to live a long life - longevity has its place.   But I'm not concerned about that now.  I just want to do God's will.  And He's allowed me to go up to the mountain.  And I've looked over.  And I've seen the Promised Land.  I may not get there with you.  But I want you to know tonight, that we, as a people, will get to the promised land!

I'm not worried about anything.

I'm not fearing any man.

Mine eyes have seen the glory of the coming of the Lord!


Do you remember when I told you about the grave of Nikos Kazantzakis?  About the words that mark the resting place of the creator of Zorba the Greek?  No name, no dates, just a few simple sentences:

You'll have to pardon me if I've always heard these lines echo in Dr. King's words and that this hearkening to the ideas of another only strengthened the ties in my mind binding Dr. King to the Greek Archbishop, the Archbishop who marched with the Reverend to Montgomery.

For us, unfortunately, the summit is still a long way off.