Foul Ball - an early Happy Birthday to me


My friends are tired of my complaints - tired of hearing that even though I went to my first Major League baseball game in 1971 and have gone pretty faithfully ever since I have never gotten a Foul Ball.

Oh, sure.  I've seen Ed Halicki throw a no-hitter, gotten a high-five from Ellis Burks after the Giants clinched the NL West in 2000, clicked a terrific shot of Pablo Sandoval as he hit one of his three home runs in the first game of the 2012 World Series - the best game I've ever seen. 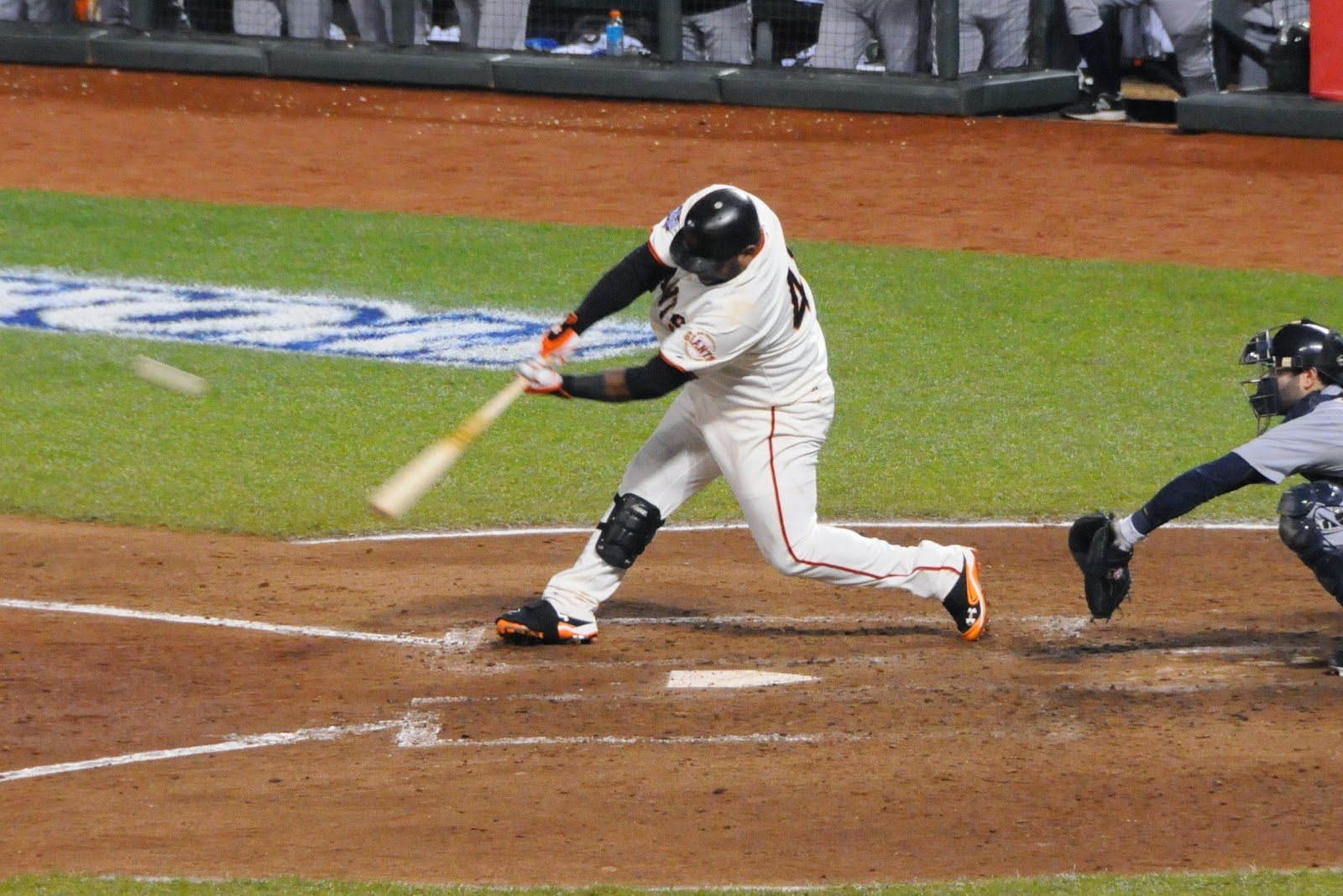 I've had Jon Miller, Hall of Fame broadcaster for the San Francisco Giants, recognize my friend Richie in a crowded stadium during a Spring Training baseball game and then call Richie in the middle of that game and ask him to tell his friend, me, to pipe down because my yells were interfering with his broadcast.

I attended the first game after baseball resumed following 9/11.  Just a game, yes - full of theatrics, yes.  But haunting and emotional, too.

I've been to games on my birthday, seen a friend get whacked by a scorching foul liner when he zigged instead of zagged - and in all those games I've seen hundreds of foul balls.  Seen the mad scrums involved in trying to secure one of those scuffed trophies that depart with lucky fans after every game - just not with me.  More than forty years, and I'd taken exactly zero foul balls home.

Have I mentioned how tired my friends are of hearing me complain about this?

The story would be better if I could say I'd become like Tiger Woods - Woods, who after each failed attempt at grasping another Major trophy becomes more desperate.  For me, though, it was less like torment and more like dull resignation.  Oh, look, I'd say, when a ball was hit nearby - that one's going to be close.

Why the attraction to foul balls?  You've seen the lucky few on the Jumbotron after they've caught a foul.  Arms thrust into the air, a mad grin on their faces, handing the ball to their child or partner, or secreting it away for safety - but with their fists pumping the whole time.

Baseballs can signify so much - for me, it's playing catch with my dad, my brothers.  All those hours of fun and practice on the baseball diamonds of my youth.  It's all those ballgames I've been to with all those people - my wife, my kids, my mom and dad.  My brothers and cousins and friends and coworkers - all those images and emotions wrapped up by two pieces of white leather secured by 108 red stitches, tightened into a three-inch diameter thing of beauty.

And baseballs also represent the hardest feat in all of sports - hitting a home run.  And they're just giving them away at every game - via that home run, or a foul, or the final out of an inning tossed nonchalantly by a Major Leaguer into the stands.

This is one reason why baseball will always be cooler than football.  You want to make football cool?  How about - when an extra point is kicked, or a field goal is attempted, don't pull up those stupid nets to prevent the ball from going into the stands - LET THE BALL GO INTO THE STANDS.  How great would that be to catch the kick that won the game?  How great?

My gift to you, NFL.  Are you listening?

My gift to you.


So I went to the first two games the San Francisco Giants played at home this season because of the largess of my friend Randy.  The second game was turning into a bit of a letdown - not a surprise since any game is going to be a bit of a letdown after Opening Day.  Game #2 was a night game following a lovely 7-3 victory the day before.  The score would be the same on Wednesday night, except this time the Giants would be holding the 3 and not the 7 when the last out was recorded against the Diamondbacks.

I'd run into my friend Cloud during the sixth inning of that second game.  This shouldn't have surprised me since I'd also run into him at a Spring Training game in Arizona a few weeks before.  It was becoming a habit, like it was perfectly natural to turn a corner, both hands holding beers, and look up to see my neighbor and friend in a stadium with thousands of fans milling about.

That kind of thing happens all the time, right?

He was sitting just one section over with his wife, Kate, and Harry and Natasha.  Alameda was well represented that night. They helped me out. too - joined me from that section, sending their voices my way in some vocal back and forth Let's-Go-Giants cheering.

To no avail. The Giants were being destroyed.  In the 8th, with the score, like I said, an ugly 7-3 in favor of the Diamondbacks, my seatmates, Randy and John and Rob, decided to head out before the end of the game.

I don't like to leave early, and my neighbors were right over there, and I'm a pushy sunovabitch, so I just assumed that Cloud and Co. would be able to take me home.  I bid farewell to my friends and headed over to sit with my other friends.

Man, I love that about baseball.  Friends everywhere.

It's the top of the 9th, and there's been a pitching change for the Giants.  David Huff has replaced Jean Machi.  The details are important, so pay attention.

Gerardo Parra was leading off the 9th for the D-Backs.  He'd mauled the Giants all night long, first by leading off the game with a triple, getting a single and then scoring in the third, hitting a two-run home run (that hardest of all feats in sports, remember?) in the fourth - and so there he was leading off again.  He needed a double to hit for the cycle, so if there was any tension in the park, it was centered around trying to get him out and not having him dance over to second.

Huff stared in to get the sign from Buster Posey, nodded his head, and then let loose with a 90 mph fastball that Parra swung at mightily, but hit foul.

We're sitting just down the third base line, and the ball arcs in our direction.

Oh, look, I thought.  That one's going to be close.

Was it headed for the upper deck?  Or was it going to glance off the row of electronic signs above our heads?

It dipped, and glanced.

And the ball landed in my new row.

Two empty seats from me.

And rolled over, real quiet like, to my feet.

No scrum, just a Hello, Sir! from a Foul Ball.

Harry couldn't believe it.  If I hadn't been sitting there, in my new section - 126 instead of 124 - in my new row, the Foul Ball would have landed three empty seats from him and rolled over and said Hello, Sir! to Harry.

But there I was and there It was.

And, lucky for me, since it was late and so many people had already gone home, there wasn't some kid hanging about that fans would guilt me into giving up my Foul for.  That's the rule - gotta give up your Foul for a kid - but since the only kid was Harry....


After I composed myself for just a second, I asked Harry to take another picture, with my phone, so I could send it off to Randy - who by that time was probably getting close to John's car.  So I sent Randy this:


And he texted back:

Because that's what friends are for.

So that's my story.  Top of the 9th.  A four-seam 90-mph fastball thrown by the 29-year-old David Huff of the San Francisco Giants to the 26-year-old right fielder Gerardo Parra of the Arizona Diamondbacks.

Parra would not hit for the cycle that night.  Pitch #2 was another fastball - Huff was going with nothing but heat - called a ball to even the count at 1-1.  For the third pitch, Huff threw his slowest fastball of the sequence, an 85 mph strike that Parra hit to the Giants' shortstop Brandon Crawford who threw the ball to the other Brandon - Belt - for the out.

The game would soon be over - and my long, national nightmare was also over.

And now - my friends won't hear me complain about never getting a Foul.  I mean, I'll come up with something else to complain about - but on that score, we're good.


The next day, I made a drink.  And since it's my birthday, I'm mixing it up again tonight because I figure that Foul Ball was just an early present for me.  I wanted to call the drink that - Foul Ball - but I made it taste like Cracker Jack.  You can't get more baseball than that, though, right?

Take me out to the ball game,
Take me out with the crowd;
buy me some peanuts and Cracker Jack,
I don't care if I never get back.
Let me root, root, root for the Giants,
If they don't win, it's a shame.
For it's one, two, three strikes, you're out,
At the old ball game.


In the end I just called it: 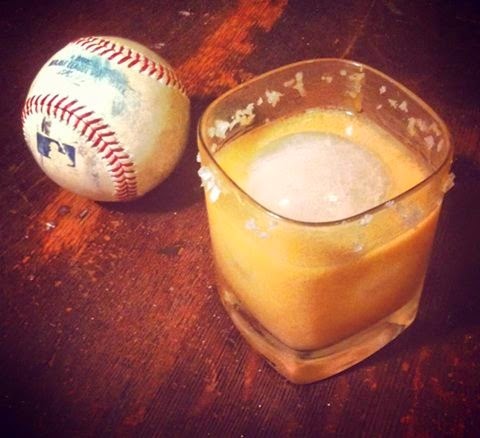 
Prepare a chilled rocks glass by brushing Peanut-Lolita Caramel around its lip and then lightly coat it with sea-salt flakes.  In a shaker, combine the Whiskey with the Peanut Lolita Caramel.  Stir well with ice.  Strain over a frozen Foul-Ball.

*Since Jason Wilson and I own quite possibly the last drops of Peanut Lolita, feel free to substitute Frangelico or, if you don't like hazelnuts, try Castries Peanut Rum.