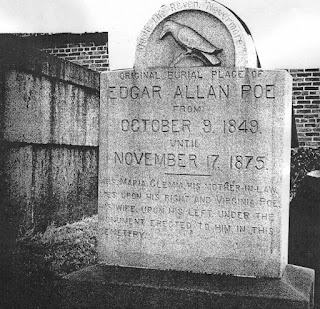 When I look up from the grave of Edgar Allan Poe, I see a street sign, “The Poe House,” with an arrow thataway. I actually didn’t know that Poe’s house still stood. I knew he was buried in Baltimore; that’s all I knew about Baltimore, really.  But his house? That was news.

I tighten my laces and walk, thataway, leaving behind Poe’s quiet gravesite in the grounds of Westminster Church - the church all brick, bloodred and gothic - but taking with me his collected works and the flowers I had planned to leave on the grave.

Roses, they have to be roses.

At the corner of Fayette and MLK, horns blare and a sunglassed Baltimore cop directs traffic. I call out, “Is the Poe House this way?” and he calls back, after waving an Audi on by, “Not your kinda neighborhood.”

I'm here for a wedding. It’s a sunny Saturday in May. The little eagle on the cop's badge glints carefree in the sun. I couldn’t ask for a better day, so this traffic-cop isn’t going to dissuade me from a pilgrimage to Poe’s house. I mean, we’re talking about Poe. Edgar Allan. “It's ok," I say.  "Do I keep going straight?”  Again he says, “Not your kinda neighborhood.” I think he’s looking at me, but it’s hard to tell because of his mirrored shades. So I just keep looking at him until finally he says, “Yes, that way.”

The surroundings change, fast. The further I walk, the more abandoned buildings I pass. An apartment row teeters, ready to fall like the House of Usher.  Apartment #13 is boarded up, and stenciled words warn, “No Loitering. No Trespassing. If Animal Is Trapped Inside Call 396-6286.”

I turn from the sign and a guy approaches me, a guy with holes in the toes of his shoes. About the time he notices the flowers in my hand, I notice his eye. Like the old man’s eye in the “Tell-Tale Heart,” it’s clouded, grey. When he asks if I can help him out, I reach for the change jingling in my coat pocket, leftside. So then he wonders if I have any smokes. Yes I do. Coat pocket, rightside. I don’t smoke, not really, but if someone asks, I like to be able to oblige. “Marlboro Reds!” he says, all excited. I flick open my Zippo, light the Red, and he puffs, happy.

“I’m searching for the Poe house," I say.  I'm thinking that since he's happy, maybe he won't mind a question.  "Any idea where it is?”

He looks at me with his good eye. And looks at the houses all around, the one there with a windowpane, spiderwebbed with cracks, another with a door that, behind the nailed plywood, used to be bright green.  “Shoot,” he says, “you can take your pick.  All the houses around here are po’ houses.”

I hold it for a second before I laugh. And then he laughs, both of us just laughing on a beautiful Baltimore afternoon. After I thank him for his time, he puffs again and says, “God bless you, my man, and good luck.”

At Fayette and Schroeder, another “Poe” sign with another teasing arrow. As I search Schroeder, I pass this family - mom, grandmom, and two little ones - sitting on a stoop, in the shade, sipping lemonade. The mom says to me, “You looking for the Poe House?” When I nod, she hoots and the grandmom hoots. “I told you,” she says. “The only reason for a white boy to be in this neighborhood,” and mom and grandmom clink lemonade glasses, “is that Poe House.”

The kids are smiling, too, and the younger one? His smile would stop a truck. He sparks that smile and the entire block shines. His mom squeezes his shoulder. “It’s about time we were getting home,” she says to him.  Then to me, “We pass that way. C’mon.”

The boy’s sister stands taller than he does, and she sports a pretty dress with yellow daises. Although it’s Saturday, the dress is looking like her Sunday best - all crisp and ironed. So starched daisies lead the way. And the Poe House is down the street but then you turn left and it’s over on the other side, on Amity Street, and I would never have found it so I say, “Thanks,” and daisies wave and a smile sparks and the mom says, “Take care.”

There it is. The Poe House. Not gothic at all, not like the church where he’s buried, the church where for more than seventy years a Mystery Visitor, the Poe Toaster, in the darkdark of predawn on every January 19th, left roses and a bottle half-full of cognac on Poe’s grave, leaving the gifts to toast the day of Poe’s birth.

Poe’s house. Home to the man I read and reread. Too many times when I was too little, probably. Poe who invented the mystery story. Poe whose poems still tintinnabulate through my head.


We all have icons, and he's one of mine.

Poe’s house. And in front of that little brick house three boys play like my brothers and I used to. Three boys, climbing the lightpost outside a simple house on a plain street. I look at the kids as they scramble around; I think about Poe and his words. Just whiling away some time on a Saturday afternoon. One of the boys - almost lost inside a Baltimore Ravens t-shirt - laughs loud and so I laugh, too. Then I lay three roses on the steps, touch red brick, knock on the white door and go.

On my way back, I'm about to pass the same cop, and though you can never walk into the same river twice, it feels like the same traffic I'm about to wade into even though a few hours have passed.  He looks across the intersection my way - I can't tell if he remembers me, but he hesitates so I call out, "Hey, it was fine!"

And the cop doesn't say a thing.  He turns away, holds up one hand, stopping traffic that way, and motions with his other hand for that traffic to proceed.  Then he looks back at me.  "What?" he yells out, kind of clipped, kind of harsh, but maybe it's just so he'll be heard above the traffic.

It's a good moment to cross so I step off the curb.  I'm about to call back, "The neighborhood, Poe's house, it was fine!" I don't have time to tell him about the considerate people I met, the boys I watched who reminded me of my brothers...

Actually, I don't have time to tell him anything because as soon as I step off the curb he reaches for his gun, lightly places his hand on its holster.

"What?" the police officer repeats, eyes hidden behind those mirrored Ray Bans of his.

I step back, onto the safety of the sidewalk.  "Nothing," I say.

And I watch as he removes his hand from his gun and stops some more traffic.

I'll detour back to my hotel while thinking about neighborhoods and those judgements people we make all the time - sometimes snap judgments, sometimes considered - I'll think about that, how perceptions can lead to bias and what that can lead to.  I'll think about feeling welcomed when apparently I was supposed to be afraid; about feeling afraid, unexpectedly, under sunny Baltimore skies, where I was supposed to feel safe.

Then I'll reread some Poe from the book I touched to his grave, seek out my family, and then get ready for a wedding. Because I can, because I can retreat to the shelter of my hotel, of my friends.

Not my kinda neighborhood, indeed.

This was written years ago when I visited Baltimore for the wedding of my godbrother.

Unfortunately, the trips of the Mysterious Visitor to Poe's grave appear to have stopped for the first time in seventy-five years.  Nevermore, quoth the raven.  Today there was silence in Baltimore.

I liked the tradition of the Poe Toaster, his mystery - so as not to forget, I'll raise a glass of cognac to Poe tonight and to his Visitor, and if you'll join me, I'd appreciate it.


Now, for the second year in a row, the Mystery Visitor has not appeared.  There were impostors early this morning.  One man arrived in a white, stretch limo - hardly the Visitor who, for 75 years, under cover of darkness, dressed all in black, would pay his respects in a manner as unostentatious as possible.

In serving this drink you simply put a piece of ice in a tumbler, and hand to your customer, with the bottle of brandy.  This is very safe for a steady drink, but though a straight beverage, it is often used on a bender.
Posted by Nicky P. at 2:52 PM