For Valentine's Day - The Happiest Place on Earth


The last time Karen and I went to Disneyland was Grad Night.  On May 25th, 1984, the Senior Class of Modesto's Grace M. Davis High School - go Spartans! - took an overnight bus trip to the Happiest Place on Earth.

Bands.  Remember the bands?  We missed hearing Cheap Trick by a few days - they performed the week before.  I think we got - Con Funk Shun?  Was that a group?

Instead of I Want You to Want Me, we got Ffun.

But what a night.

For how much fun we'd have - the Pirates of the Caribbean, the Haunted Mansion, getting our picture taken with Pluto - the trip began ignominiously.  My fault, that.  All mine.

I knew about these electrical wires that crossed the 5 over the Grapevine in the Tehachapi Mountains.  To share this fact, because share I must, I commandeered the driver's public address system and told my classmates that when we got there - to where those wires crossed overhead in the Tehachapis - they'd get a shock because we were so high up and the wires were so low down that you could feel the electricity conducted through the windows.  Careful, though, because sometimes the effect was uncomfortable.

I told everyone this as we rolled out of Modesto.

Reminded them in Merced.

Squawking on the mic made me feel like those truckers on their CB's in C. W. McCall's Convoy.  10-4, indeed, good buddy.

We're now hours into the trip as we begin our ascent through the mountains, but because of all the reminders, I didn't have to ask my fellow students to keep an eye out.  When the towers appeared alongside the freeway, the towers linked by those coursing wires, it wasn't just me who got electrified.

I got back on the mic and told everyone to get ready, to touch the windows.

If you're with me, right there beside me, I'll hand over the mic so you can also remind these soon-to-be graduates of the drill.  And as you tell them to reach out, you'll look down the length of the bus and see dozens of students - the boys in coats and ties, the girls in skirts and blouses, good ol' Walt maintained his dress code down in Anaheim - you'll see those natty kids reaching over themselves and others to touch the glass.  Waking up their snoozing seatmates so they don't miss out.

As we approach the wires overhead I'll take the mic back just as the bus passes underneath - as the driver himself reaches for his side window because he's never experienced this phenomenon.  I'll look out at all those Spartans and tell them, as their fingertips graze glass, to be careful.  To be careful because on a clear day like that one in May - in 1984 - the effect I described could be magnified.

Then I ask them if they feel it.

Feel what? some grumble, because we're under the wires now and the high I've promised hasn't hit.

Feel what? I ask right back.  The pane.  Don't you feel the pane?


As understanding nears, as the grumbles increase, as these students who've spent four years with me - and now a long four hours on this bus - see the dawning of what's just happened, that I've teased them through the length of California's great valley just to jolt them with a bad pun, the grumbles become threats.

Matt Petersen yells out that I better stick close to Mickey and all the other rats in Disneyland.  I'm not about to correct him - Mickey's a mouse and would take offense at the comparison.  I just hand the mic back to the driver who hangs it from its mic doohickey as he keeps his eye on the freeway sliding under his bus.

Stupid kid, I'm sure he thought.

It was a long walk back to my seat - deflecting the slings and arrows being tossed my way.  And Karen?  Karen looking at me, shaking her head like - oh dear.  Oh dear.  Really?  I'm going on Mr. Toad's Wild Ride with this guy?

I do not know why she put up with me - or continues to do so 30 years later.

But Disneyland?  We're going back.  For the first time.  Not with fellow students but with two kids in tow.  We'll track down Pluto, make him take another picture.  This time with four, not just us two.

I wonder how much Pluto has changed in 30 years?  More than us, or less? 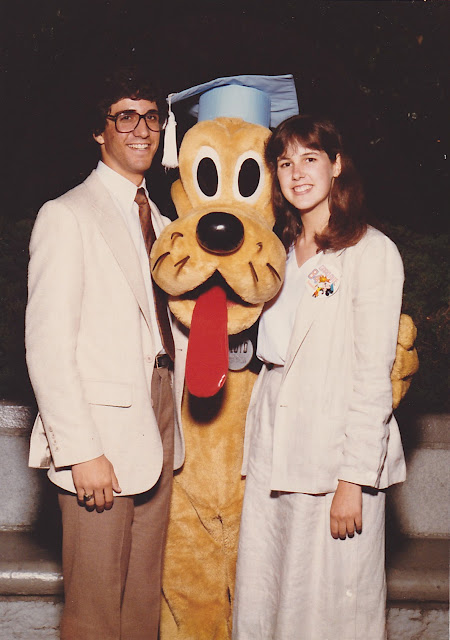