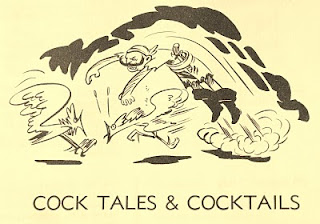 It begins with a bottle of rye.

(rī)¹, a fabulous new rye whiskey, has its home in just such a bottle.  I know, I know.  (rī)¹ is a ridiculous name.  Rye is rye, and if you're going to go to the trouble of brewing it, and bottling it, and you do both things right, why hire some newbie design-school-grad to create a name that's pretentious?  It's not like rye drinkers are going to be taken in by fancy monikers, right?

Oh, but the bottle.  The bottle is a beauty.  There's a good inch of solid, clear glass at the bottom, so thick that it makes you think crystal.  And that crystal is the lovely foundation for the slender, elegant bottle that holds your rye, the bottle so tall and sexy that it reminds you of something you'd find a premium vodka in, but this isn't vodka, so the only thing that's clear is that beautiful base, because the rest is all rye whiskey, the whiskey rich amber with a hint of cherry red.  Flashy?  Sure.  But eye-catching in a good way.  This is not a slutty bottle.  Maybe that newbie grad was onto something after all.

Anyway, the bottle has been staring at me from the shelves of Alameda Cellars, a liquor store that's around the corner from the bookstore I manage.  Ever since I started working in Alameda, I've had to buy my own Diet Coke.  In San Francisco, Delaney's was next door, and the people who poured drinks there were my friends, and they were always happy to keep my glass full.

But now I don't have a great bar like Delaney's right next door to me, so I have to buy my Coke, and on those days when I have the gumption to actually walk around the corner to Alameda Cellars, I'll score a sixpack there instead of buying onesie-twosies from the bagel shop.  The Cellars had a great deal on Bulleit Bourbon a few months ago, and that's when this bottle of rye first started making eyes at me.  Sitting there on her shelf, all lonesome, with bourbon for company but no sister ryes.

I've mentioned that I'm into vintage cocktail books, yes?  Yes of course.  Imagine my delight, then, when Randy and Katy came a'visiting.  Katy was very pregnant (Evan would make his arrival in less than a week - welcome, Evan!) and I hadn't seen them since Arizona, in the Spring, so after hugs and handshakes, Randy hands over this book. 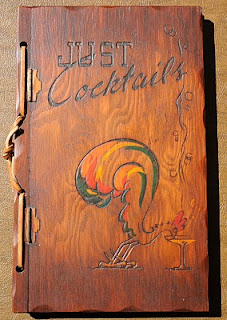 Now, if the bottle I've described was remarkable, this book was something else entirely.  Just Cocktails was its title, the title seemingly burned into its wooden cover.  Yes, both the front and back covers are wood, their edges gracefully chamfered, the covers – and all the pages in between – held together with a leather strap.  The title, Just Cocktails, printed above the etching of a fanciful rooster pecking at a martini glass, the rooster's tail feathers painted yellow, orange, green and red.

The book in such amazing condition that it's difficult to believe it was published in 1939.  But that's what it says on the title page:

Published by the Three Mountaineers, Inc.  Decorations by Tad Shell

and by decorations they mean dozens and dozens of wonderful drawings to accompany the dozens and dozens of incredible cocktails.  This is a book that doesn't spend lots of time setting the scene.  There's a little bit of that, sure, like in the chapter titled Cock Tales and Cocktails, where the editor gives us two stories for the origin of the word "cocktail."  W. C. Whitfield tells us of the revolutionary-age barmaid who tossed together drinks for Lafayette's officers, and snatched tail feathers from a nearby rooster to spear the cherries, and also the story of the buccaneers of the Spanish Main who stirred their potables with the plumage of West Indian Cocks.

So there's a little of that kind of color, with Tad Shell's intoxicating illustrations (see the buccaneer, above), but this book's main concern is just cocktails, and that's what W. C. Whitfield compiled here, so thank you, W. C.  And thank you, Randy and Katy, for thinking of me and putting it into my hands.

Let's end where we began – with that bottle.  Because all I needed was a little push to get it into my hands, the same hands that hold Just Cocktails.  I'll try its rendition of a Whiskey Sour

and since Just Cocktails  is a little vague when it comes to measurements, I'll use half a teaspoon of powdered sugar.  And then, because I'm already making judgment calls, I'm going to crack open the jar of Luxardo Cherries I scored at Blackwell's Wine and Spirits in San Francisco.  If you haven't been, go.  If God drank, he'd shop at Blackwell's.  They introduced me to Luxardo, The Original Maraschino Cherries, and assured me that they bore little resemblance to the neon red cherries you find in Shirley Temples.  Whiskey Sours often call for a cherry, so Luxardo it will be.