I've long felt that historian Karen Abbott was writing to an audience of one - namely me.  When the dialogue of a book commences, and an author is suddenly talking to you, and you feel that each time the page is turned the writer has taken another sip from their drink there on the bar to enable them to continue with their story - well, for this reader, that's exactly what I want.  The author's voice inside my head, talking just to me.  And when they're good, any peculiarities of voice fade into the background and you're left with a friend telling you a story over a few drinks.  That's what happens with me and Karen Abbott - the words on the page fade away, and I'm not so much reading as listening.

The first book of Ms. Abbott's that I read was Sin in the Second City.  I was drawn to it because of the lure of Chicago, the salaciousness of brothels and booze - catnip for me?  Sure, absolutely.  But I was immediately struck by her trenchant use of language and how she was able to introduce information seamlessly.  Some historians do their research, and then, by God, they are going to cram every detail they learned into their work.  This leads to clumsy writing and the gratuitous elements are as easy to spot as peppercorns in a bowl of sugar.  It's better to have necessary and illuminating details rise up from the story, not to be thrown down from on high - and this is exactly what Karen Abbott does time and again. That first book I read explored the creation of what would become the Federal Bureau of Investigation, and in her latest work, The Ghosts of Eden Park, you can hear echoes of Sin in the Second City because the Bureau is again at play.  This time, the Bureau's concern isn't enforcement of the Mann Act, but rather the folly of Prohibition.

In The Ghosts of Eden Park, you'll read about one of the greatest bootleggers of all time - no, not Al Capone, but George Remus.  A year after Prohibition began, Remus owned more than a third of all the alcohol in the United States.  This allows him to throw a New Year's Eve party for more than 100 guests where he would light cigars with C-notes, where each guest would find a $1,000 bill under their plate, where the men were given diamond encrusted stick pins and gold watches - and for the women?  A set of keys to unlock one of the gleaming and new 1922 Pontiacs parked all in a row outside the Remus mansion.

The lavish lifestyle, of course, can't go overlooked, and soon Remus will find himself hunted by the First Lady of Law, Mabel Walker Willebrandt.  She's tenacious, smart, and quick.  During a meeting to discuss the possibility of becoming only the second woman to receive an appointment to Assistant Attorney General, she "had only one discernable shortcoming, joked President Harding...her youth.  Laughing, she assured him that she would soon outgrow it."

That detail?  That let's the reader know that Remus is indeed up against it.

Abbott draws her cast of characters, gives each personality - from the pugnacious Remus, to his doomed wife, Imogene, to the investigator sent by Willebrandt to probe Remus' empire, Franklin Dodge.  You'll find booze here, naturally, licentiousness of the first order, and guns.  And since we're of course talking about one of Chekhov's guns, you just know it's going to murderously go off.

In addition to all this high drama are those details that Abbott ingeniously peppers her story with - amputees filling hallowed out wooden legs with good whiskey; Charles P. Taft II, the Hamilton County prosecutor, son of a President, who would charge Remus with murder, described by his mother as having "quicksilver in his veins," the quicksilver fueling her son's boundless energy; or the "raid on a soda parlor [that] uncovered squirt guns with a two-drink capacity." 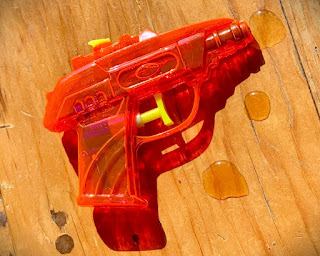 So Abbott found herself a story full of Sturm und Drang but never allows the spectacle to spiral into the melodramatic.  She lets the fantastic actions speak for themselves, displaying a piece of history I knew nothing about, laid against the backdrop of Prohibition (which I thought I knew about but there's so much here that's new), all told with wit and charm and Abbott's characteristic devotion to accuracy.

Have I said yet that you need to mark your calendar for August when you'll be able to make the story your own?

The characters you'll meet are all ghosts now.  Some shuffled off our mortal coil, others were pushed.  And of course, it's not easy to shoot a ghost - unless it's conveniently filling a glass.  I decided to use absinthe in that glass.  This seemed right considering its own history (nefarious and wrong) and the fact that it was banned in the United States some years before Prohibition, and most importantly that the Ouzo effect would provide me with all the ghosts I needed.  When Remus exits the Atlanta Penitentiary, full of "threadbare swagger," two marshals ran across the street - I hope to one of those soda fountains with the squirt guns filled with mystery - and returned with a chocolate soda to further energize their charge. 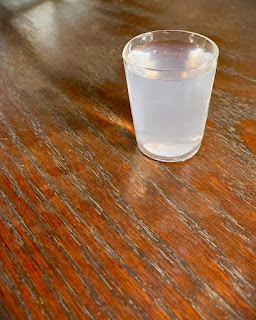 I thought that little dose of chocolate would play nicely with the licorice of the absinthe, and since we're just talking about a shot, that's about all we're going to add.  So, for Karen Abbott, an easy Ghost Shooter:

Combine the absinthe, simple syrup and chocolate bitters in a shot glass.  Drip cold water into the glass, allowing the absinthe to louche.  Then, shoot that ghost.