Kermit Lynch at the Chapel, today at 2pm

And then sometimes you get thrown a fat one right over the plate.  Gotta swing, right?  Gotta swing.


Today at two, Books Inc. presents Kermit Lynch in conversation with Rajat Parr.  Kermit Lynch, purveyor of fine wine, importer, wine maker, author - just so happens to divide his time between Berkeley and France - so those of us in the bay area are fortunate to have him so close, so often.

Have you been to his shop, Kermit Lynch Wine Merchant, on San Pablo in Berkeley?  It's just ridiculously wonderful to have someone with such exceptional taste so near.  I will admit that I am not an oenophile - if the definition of the word is a connoisseur.  If, though, you define it as someone who's simply a lover of wine, then I'm your guy.  I used to be a slave to the ratings-cards that wine shops provide - 87 points!  I used to be in.

Now, though, I talk to the people behind the counter.  That's what we do at ye olde bookshoppe, right?  If you have a question, I can answer it.  Same with wine.  Good shops employ knowledgeable people, and Kermit Lynch Wine Merchant is full of good people with great advice. 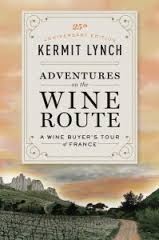 So there's the fact that Mr. Lynch is a recognized and influential wine expert - as this piece in the New York Times wonderfully demonstrates.  Then there's the book.  When Adventures on the Wine Route came out in 1988, critics as diverse as Roald Dahl, Hugh Johnson and the Financial Times praised it mightily.

It's idiosyncratic, funny, informative.  A wee bit different than the stodgy wine writing you might be used to.

Adventures on the Wine Route is a great pleasure to read.


It’s this idea of pleasure, I think, that separates Mr. Lynch’s book from the others, and that also illumines his taste in wine.  Wine is, he writes, above all, pleasure.

What’s he a fan of?  Good wine.  He’s not a fan of filtration – which, though it makes more wine safe from spoiling, also makes it impossible to achieve the heights unfiltered wines can achieve.  We would not castrate all men, he writes, because some of them go haywire and commit rape.

Thank god for that.

But today - the event at the Chapel.  Not only is it Kermit Lynch, he's going to be in conversation with Rajat Parr, wine director for the Mina Group


At Parr’s restaurants - like Michael Mina - he says his concern is with showcasing the wine itself – not necessarily its reputation, but what’s in the bottle.  He says to taste with your heart, not your mind – which might give you a clue as to why they get on so well.

He also is the author of Secrets of the Sommeliers – bestseller and winner of a James Beard Cookbook Award.

Plus, he loves PDT, a speakeasy in New York which is one of my favorite bars, ever – in addition to his own Clock Bar here in the city, meaning you don’t have to travel 3,000 miles to get there.

Both men would agree that the great occasions of our life are celebrated with food and wine.  So, today, a celebration of an amazing author, a terrific book – and great wine.

Oh, and that fat one that was thrown over my plate?  It was the request to introduce both men at the Chapel - something I will gladly do.  Here's me, then, swinging away.