I can't say polliwog without smiling.  C'mon, say it with me:

Not only is it just fun to say, it evokes summers - past and future.  It's 1971 again, I'm in Mrs. Johnson's kindergarten class again - bringing home a whopper of a polliwog with his big ol fat belly, legs just beginning to emerge in front of his strong tail whipping rightleft rightleft.

So when Karen leaves me a message, all in a rush,

Hey Nick so we're bringing some tadpoles home (laughter) from the birthday party so we're headed to Petco.  Talk to you later bye.

I shoulda been happy.  Tadpoles and polliwogs?  I don't know about you, but again, for me?  That was Modesto in the '70's.  Skipping around, looking in puddles for that day's wonder.  Baby frogs coming out of the ivy after the sprinklers had doused the clinging vines.

But then I thought, tadpoles and polliwogs?  I couldn't remember just exactly.  Had my polliwog finished his metamorphosis?  Or not?  And if it did, then what happened?

In the full throes of this Dad-worry - would the girls cry when the buggers died?  Would we have to do the pet-funeral thing, replete with a cross made out of Popsicle sticks?

(There's another one that's great to say:  Popsicle stick.)

In the midst of that grumpy Dad moment, I shot Karen a text:  WTF?

Only after I sent it did I see it for what it was.  Cold, overly terse.  Brusque.  Clipped and curt.

So I thought about it, and started to warm to the idea that a polliwog would be fun - life-span be damned. 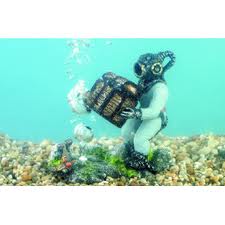 I'm picturing my girls running into Petco, their little sandwich bag sloshing with water and polliwogs.  Holding the bag up for inspection, asking what they needed to keep the dinky blokes happy.

Now I'm wondering if Karen is getting a fishbowl or if she'll just use one of our Mason jars.  Colored pebbles for the bottom?  We couldn't put one of those little divers - the guy in a full Jules-Verne suit, inspecting a chest of gold, the chest opening and closing as the diver bubbles there underwater - we couldn't put one of those in a jar, but if Karen got a little aquarium, we could rig one up, no problem. 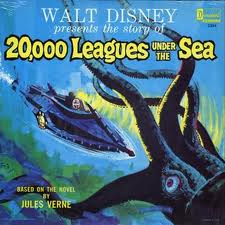 Before I can go the full 20,000 leagues down, my phone rings.  It's Karen's number, but it's not Karen on the other end.

What's that, honey? I say, because Kristina is in the background, yelling about squishing something.

Dad? Elizabeth says again.  The man said they were mosquito larvae.  He said we shouldn't take them home so Kristina squished some.  Then we threw them away in the garbage.

Mosquito larvae?  I'm processing that Elizabeth sounds bummed, but not ridiculously so.

Mosquito larvae?  Like my friend Mia said, helluva thing to put into a goody bag at a birthday party.

Or Tracy's response - Hey kids!  Know what I'm gonna get you for your birthday?  Malaria!

Dad? Elizabeth says.  Kristina wants to say something - and then there's the fumbling of the mobile being handed from a seven-year-old to a four-year-old.

Kristina's voice comes along the wire - at about 180 mph.  Dad-they-weren't-TADpoles-they-were-bugs-and-I-squished-one-Mommy-said-they-weren't-good-can-you-believe-it-bye-I-love-you.

Wow.  I'm thinking out loud here, and what I'm thinking is - they're not bringing home an aquarium from Petco.  Really, I'm going to hazard that guess.

But now I'm all geared.  I really want one of those diver-things.  If not an aquarium, maybe hermit crabs?