And I ask Kristina if she remembers her grandfather – my dad, her Papou – because I worry she’ll forget.


Karen tells me to get one of the photo albums. It’ll help, she says, if Kristina sees him – so I search through the stack of albums piled on top of the black trunk next to the couch. I grab one titled Early Spring 2010 and hand it to Karen. She says, Not that one, and all I can think is, Why the heck not? I love this one. It has one of my favorite pictures of Elizabeth, that one where she's looking straight at you with her eyes so big and Superhero blue. And it has the pictures of Spring Training – all of us in Arizona. The girls' first trip to see the Giants in Scottsdale, their first visit to Tucson, to Mrs. Mellis. The album with that great shot of Kristina in Mrs. Mellis’ cactus yard.  Kristina in her beautiful, strappy Hawaiian dress, Kristina soft and small surrounded by prickles, the prickles yellow and brown and green.
But there’s something about Karen’s tone. Something in those simple words, Not that one. And it takes a moment, but then the penny drops. Of course not that one. I’m trying to show Kristina pictures of Papou. So she’ll remember. But this is the wrong collection – Early Spring 2010 – to find pictures of Papou because— 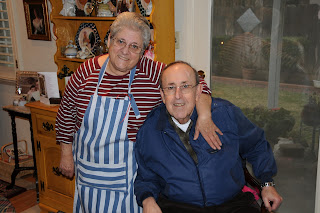 This isn’t the album to reinforce in Kristina an image of my dad because—
Christmas 2009 would be a better choice because—
How can it have been a year since my father died? A year to the day? March 1st already?

The week before March 1st last year. That week before was a hard time. I’d been driving to Modesto a lot in January and February, when my dad began failing, when—

Christ, what a ridiculous word, failing.  This is what I'm left with, ridiculous words.  But they’re all I have to convey what I felt, words are all any of us have to convey what we feel, but the words, often, are so ridiculous. How can the Inuit have dozens of words for snow – specific words for falling snow, for snow on the ground, for a snow drift – and yet I don’t have the precise word for the act of watching the strongest man I’ve ever known confronting, head on, the end of his life, with that end accompanied by pain of a magnitude unfathomable to me. Meeting that pain and that fate with courage, with quiet dignity. I should know the word for that, shouldn't I?  Shouldn't there be a word?

Of course, the Inuit probably don’t have a hundred words for snow. Is that just another something made up by someone somewhere?

The last Wednesday in February, last year. Late at night – 11:30? A quarter of twelve? Dean called. I couldn’t make out the words – though of course I knew what they were – I could just make out the sounds of my brother, crying soft. He thought, they all thought, my brothers and my Mom, that my father was dying.  That night.  Right then.  I got in our Accord, drove fast. I drove fast a lot then, in those weeks speeding back and forth to the Valley.

Part of me felt like an intruder. I don’t live in Modesto – could only give my often strong and strident opinions over the phone, over email. Had to remind myself that we were all interested in one thing, in one goal. And when those doctors failed my father—

I will say nothing other than that, that those doctors failed my father—

When those doctors failed my father, and our goal changed, became instead focused on easing our father’s pain – nothing more, in the end, than that – then we called Hospice. 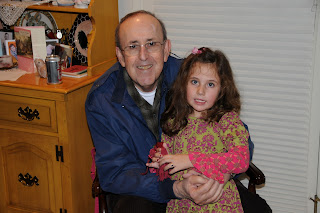 Too late – we called too late, but dying is such a mystery, and until you go through it, closely, you don’t recognize the territory. My vision was clouded by the sad, by the anger – by the grief, guilt and regret. It was too hard to see through all that, and so Hospice was called too late.

Dean went home – slowly, grudgingly.  Ball cap on his head.  George lay down on the couch in the living room.  My mom.  My mom needed rest.  She of any of us needed to rest and so, finally, she agreed to try and sleep in my room.  To rest, with no chance to dream.

I stayed up, next to my dad, and talked to him.  George said he could hear me from the couch.  Just talking.  Said I put him to sleep with all my talking.  I thought I'd remember everything I talked about that night.  But what did I say?


I just talked all through that night – to my dad, with his eyes closed.  With no hope of them opening.  But I could hold his hand in mine and talk.
What do you say when there instead should be a flight of angels singing your father to his rest?  I have no idea - so I just talked.  Through the dark and the quiet.  Picking up framed photos – snapshots of our lives.  George there, a chubby baby.  Dean and Laura, their wedding day.  And the girls.  The Christmas photo with all my dad's granddaughters.  The baby, Eleni.  Her sister, Adrianna.  Our own girls – Kristina, just two.  Elizabeth, six. 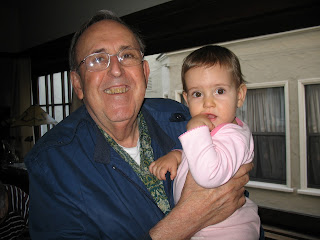 I worry that Kristina won't remember.  She was so small, not yet three.  Karen thinks she'll remember – does what she can to make that happen.  That was why Karen told me to get the album, yes?

So I just talked.  There was nothing to say and so much to say.  So many questions that I'd never asked.  When was your parent's anniversary?  What shows did you listen to on that Philco radio?  When you saw that screwdriver ripping through the screen door in Hiawatha, were you scared?

My dad opened his eyes.  Opened them and saw me - really saw me.  Made eye contact with me and so I told him how much Kristina loved him, yes, how much we all loved him.  Got it out fast before he closed his eyes and dropped off – but dropped off to a restful sleep.

Just a little later, my dad opens his eyes, again.  Could focus on me, again.  So I tell him, again, how much we love him.  Then asked if he wanted his blanket pulled up and he said, Yes, please.

When his eyes opened for a third time that morning, I told him that we were all just thinking about how much we loved him.  That time I got a big smile and my dad looked at a picture of my mom and said, We love you, too.

We all love you, Dad – I'm just saying it again and again so he hears me, so he knows that's all anyone is thinking about.  He kind of waves me off.

We all love you, Dad.

Thank you, he says.

No, Dad, I say, emphasizing my words, thank you.

And my dad smiled big again.

In the midst of that exchange, I heard my mom coming down the hall, and the look on her face when she saw my dad, saw him talking to me, focused on me – ah, Mom.  I love you, too.  For everything, but especially for that look.  Confusion, astonishment, wonder.  I know that she knows that this is only a reprieve – but we've been given my dad back, for a few days at least.

In those days, we can remind him how much he means to us, to the girls.  How his friends are thinking of him.

We can say goodbye.

I can talk to his neighbors of nearly fifty years – Ed and Ann – and then relate to my dad the stories they shared with me.


We can say goodbye.
I can hold his hand like I did that night and remind my dad of his influence on me and that I love him, that the girls love him, that his house is full of love for him.
We can say goodbye.
When on that Sunday Karen says the last words she'll ever say to my dad – when Karen on Sunday, February 28th, 2010, tells my dad that she loves him, my dad will have the chance to close his eyes and open his hands and say, I love all of you, too.
All of you.
Posted by Nicky P. at 2:33 AM