Dad, the ball no cut 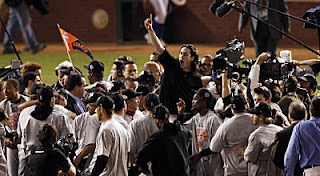 I want to tell you about Halloween, about carving a Giants' pumpkin while Karen trick-and-treated with our girls.

I want to tell you about me, sitting there on our steps with our front door open so I could listen to Game 4 of the World Series, the sounds of the Giants' broadcasters coming out of my dad's seventy-year-old Philco radio - the radio that my mom didn't know how to work when we were in New York, and so she had to rely on getting phone updates while her Giants played the Braves in the Postseason.

Thanks, Dean, for keeping Mom up-to-date.

I want to tell you that while the kids who approached me last night said Trick or Treat, their parents would call out from the sidewalk - Nice pumpkin! or - What's the score? 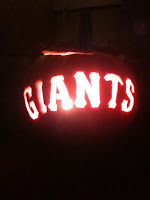 I want to tell you about the mom, dressed like the Mad Hatter, who laughed and said, Carve yourself a pumpkin like that, you guarantee yourself a win!

I want to tell you how beautiful our girls looked - our little Dorothy and our littler prima ballerina.

I want to tell you about picking up five pizzas from Zachary's for the party that got moved to Harry and Natasha's - no one wanted to come to our house during a World Series game if we didn't have a tv.  Of course not, right?

I want to tell you about all the Black Cat martinis I mixed.

I want to tell you about the reactions from Sharon and Janine and Karen - grimaces and coughs and oh reallys.

I want to tell you about the reactions from Nick (dressed as Niki) and Brad (dressed as Luke) and Harry (dressed as Giants Fan) - thumbs ups.

I want to recount the gem pitched by the Giants 21-year-old wunderkid, name of Bumgarner, who tossed a beauty of a 4-0 victory.  My transistor is older than this kid.

I want to tell you about getting a phone call from my brother George.  I never get phone calls from George.

I want to tell you about the traffic jam - tricksters trying to get out of Alameda when all the candy on the Island had been given away, the lady calling from her car, Are you from Alameda? and How do I get to Otis?

I want to describe our pumpkin tree, the decorations on Thompson, our neighbors trooping by.

I want to show you the candles flickering, the jacks grinning, the webs stretched across bushes.

I want to rejoice in the reappearance of the Giant Spider, the Giant Spider with Teddy Bears and dollies caught in his web - the Spider a no-show until yesterday morning - the Spider who treks every year from Kansas (wink wink).  And that's the story you'll tell the girls if you ever get the chance (wink).

I want to tell you about Kristina double-fisting treats from our goody basket to give out to girls and boys bigger and smaller than her three years.

I want to share the shine from Elizabeth's ruby slippers.

I want to try and untangle the pumpkin and witch and black-cat necklaces with Karen again, the necklaces that were supposed to go into our goody basket but that lay on our floor - a chaotic, twisted mess.

I want to show you the picture of three boys, my cousin Mitch, my brother George, and me.  1971.  Our first game at Candlestick.

I want to tell you about taking our girls to Giants' Spring Training this year for the first time and how much they loved the desert.

I want to share the texts and posts from Mitch's daughter Sara, except she swears like a sailor when she gets excited.  And she was excited.

I want to describe the buzzing sounds of the texts that came in, like clockwork, texts when the Giants scored, from the same three, all year long - Leo and Andy and Dean.

I want to show you the ghost hanging in our window.

Dear Jessie, I have been
thinking about your two house
roses since I come home
those out beside the Piazza
and if you are not going
to take them in, can I
have a slip from them
when I come over if they
are not froze.  I would like
them awful well.  I got home
yesterday just in time.

Also, I want to admit that I sneak candy from Elizabeth's plastic pumpkin.

I want to do all that, and then describe the feelings I have about the San Francisco Giants.

And their World Series Championship.

And watching Game 5, the game again at Harry and Natasha's, eating leftover Zach's - so good friends and good kids, the kids watching Scoobie Doo upstairs while the adults cavorted downstairs.

When have the adults been louder than the kids?

And all the beer that disappeared.  And all the Orange and Blacks I mixed.

And that Jengiz promised to take me into McCovey Cove on his boat if the Giants needed a Game 6 - if the weather was fine, of course.  And of course on Wednesday the weather will be glorious.

And the text I got from Dean at 11:19, where he describes the Series MVP, Edgar Renteria, where he shares Renteria's answer to the question:  Edgar, how did you handle the count when Lee was behind 2-0?

When he threw me the two balls, I said, I'm looking for one pitch.  If he throws it, I'm going to swing.  After that I'm working the count to see if he can walk me.  But I got lucky, he throw cutter inside, the ball no cut.  So the ball stayed in the middle.

The ball no cut.

And when the ball no cut, Edgar Renteria hits a three-run homer, the difference in a game that was superbly pitched up to that point.

So I want to tell you about all of that, these past two days of baseball and Halloween.

And those thoughts are all shooting around like fireworks over a baseball stadium.  Exploding.  Shining bright, fading fast.

But I keep coming back to my dad.

You knew that, though.

My dad who drove the family to that first game in 1971.

My dad who played catch with me in the front yard with his old-fashioned mitt, that mitt hailing from Hiawatha, Utah.

My dad who drove us to all those Modesto Reds' games when I won Season Tickets playing TV Bingo.

My dad who always took the San Mateo Bridge when he headed to Candlestick.

My dad who'd slow when we'd pass another car if they had kids in the wayback, allowing us to wave if they wore the Orange and Black or make faces at Dodger Blue.

My dad who'd sit in the stands, when he could, and watch his sons play Bel Passi Baseball.

My dad who hit me flys at Woodrow Park.

Who took me to the doctor in sixth grade when I wrecked my arm by trying to throw back the baseballs as far as my dad could hit them.

My dad who liked to listen to baseball on the radio as much as I did. 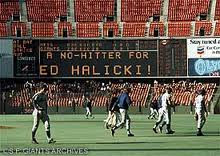 My dad who let us stay at Candlestick when I was nine, stay and watch the second game of a double header - sometimes we'd leave early but my dad let us stay and so we saw Ed Halicki's no-hitter.

My dad who came to California just a few years before the Giants did - and so when the Giants arrived, they became his team.  Would become my team.  My daughters' team.

My dad who could still hit the cover off the ball when the Katsufrakis Family Reunions first started up.

My dad who wore knee-high white socks and dark shorts while he hit the cover off the ball at those reunions at Davis Park.

My dad who went by "Wheels" in Hiawatha.

My dad who got closer to the majors with each passing year.

This was his joke - Nick, he would say, the older I get the better I was and I get closer to that Major League contract every year.  And we would laugh at this, at my dad's self-deprecating nature.  Except - after he died - his cousins and friends, those who knew him in Hiawatha, they told me my dad really was a great player.  We didn't call him Wheels because he liked to drive, they said, we called him Wheels because he was fast.

But to his dad, my Papou, baseball was just a game.

And so my dad wasn't allowed to play for the baseball team sponsored by the owners of the Carbon County Coal Mines.  Papou forbid it.  What was my dad thinking?  He was shoveling coal, sure, but that was just for a little extra money.  For school and the family.  He wasn't going to do this his whole life, not like Papou.  Wheels was going to college.

My dad who died on March 1st.

My dad who never experienced the joy I'm feeling tonight.

My dad would've spun my girls the same way I did, if he could.

My dad would've given me a hug.


When I called her in Modesto.

As I dialed the only number I've ever known for my parents.

When their phone - when her phone - started ringing.

When I started to cry before she picked up.

When all of these fireworks exploded in my head at the same time, sparkly bright and loud, before she picked up.

All I could think was,

And when my mom picked up, and I said Hi, the first thing she said was,

He loved his baseball, she said.  I can't stop thinking about your dad and Lykourgo.﻿

Lykourgo was my mom's brother-in-law, her sister's husband, my cousin Mitchell's dad.  More often than not, it was Petey, Stella, and Mitch, along with my Theo Lykourgo and Thea Maria, who'd join us on those Candlestick excursions.

And my mom was quiet for a moment.  Hoots and hollers coming from the downstairs at Harry and Natasha's.  Exultations from the outside.

But quiet from her.

No, no it's not, she said, όχι μόνο αυτό.  It's not just that, my mom said, in Greek - but the meaning of the words was simple and clear.

And I think that's why I love it - baseball - so much.  Because, like my mom said, it's not just that.  It's all those hours playing catch.  All those trips to the park.  All the radio.  All the seasons.  The Giants gave me and my dad something to talk about if we didn't have anything else.  All the hot dogs at the 'Stick.  All the chocolate malts with tiny wooden spoons.  Always the hope for a foul ball and never a foul ball.

All those years when we'd think, This was the year.

And this was the year.

This was the year.

But my dad's dead.  Eight months to the day after my dad died.  Spring then, Fall now.

Did I say bittersweet?