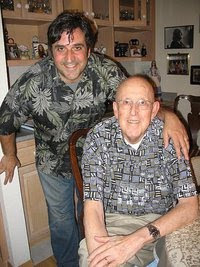 My dad died a month ago, on March 1st.

When he was diagnosed with cancer in January of 2009.

When my father was diagnosed with cancer.

When Tony Petrulakis was diagnosed, I realized I had never said "Thank you."  I manage a bookstore.  I thank people for buying People Magazine, but I had never really thanked my dad.

Because there were so many things I wanted to say, I started writing my dad a letter - and finished writing it the week before he died.

My mom read it to him on a Saturday night in February.

He was quiet.  He cried a little.

This is that letter.


Thanks for carving the letter ‘N’ into the peanut butter of my sandwiches. I do this now for Elizabeth and Kristina. Elizabeth swears it makes the sandwiches taste better.

Thanks for taking me to the doctor after I dislocated my elbow while playing catch with you.

Thanks for getting lost on road trips and showing us more of the American West.

Thanks for driving us to Carmel for Easter at the Kastros’.

Thanks for always stopping at Casa de Fruta on the way to Carmel.

Thanks for getting closer to the majors with every telling of your baseball exploits in Carbon County, Utah.

Thanks for making spaghetti for the boys that one time when Mom was in the hospital. Really, once was enough.

Thanks for making wine with Nick Kondarakis.

Thanks for looking at my swollen ankle, broken since early afternoon when I fell off Mark Arnold’s bike, and saying, “The boy’s ankle is broken. We need to get him to the hospital.”

Thanks for giving me my first real job.

Thanks for showing me how to stop a quick-change artist during the first week of my first real job.

Thanks for teaching me not to lean on the counter, doing nothing, while working at my first real job.

Thanks for indicating to me and Cousin Peter that our argument about music was pretentious.

Thanks for taking us to Santa Cruz for summer vacations with our cousins – Peter, Stella and Mitch – even if Peter was wrong about the Doors.

Thanks for holding my hand when that big wave hit. I was underwater, feet flailing, choking on seawater, panicking, but your hand holding mine was so strong, so big. So big.

Thanks for keeping the best Christmas presents hidden until we thought we were done, like the Daisy BB gun behind the couch or the three bikes, one for each of us, waiting in George’s room.

I loved that Schwinn with its banana seat and green and white tassels streaming from the handlebars.

Thanks for teaching me to ride that bike.

Thanks for not getting upset when I crashed the Schwinn into the Garcia boy’s beautiful blue Impala the same day you taught me how to ride. Riding was easy. Stopping, not so much.

Thanks for getting me Twiggy – from the pet shop at the Village – for my fifth birthday.

Thanks for hiding her in a box in the back of our green station wagon.

Thanks for buying that station wagon.

Thanks for teaching me how to get Twiggy to stand on her hind legs by teasing her with bologna.

Thanks for being able to whistle for Twiggy.  Do you remember how, wherever she was - down the block, around the corner, at the park - she'd come running, low to the ground, legs churning, her fur swept back?

I wish I could whistle like you, two fingers and loud.

Thanks for getting me my first haircut, a slicked back 50’s hairdo.

Thanks for letting your barber be my barber.

Thanks for not telling Mom what Donny and Jimmy really named their dog.

Thanks for picking out a different shade of shag for every room in the house. Every room. Thanks that mine was named “Candy Stripe.”

Thanks for letting me drive Elko to Winnemucca, past Battle Mountain, 125 miles. When I was too young to be behind the wheel of a car.

Thanks for picking me up from Somerset Junior High in a brand new car.

I won’t mention that the car was a maroon, two door, Chevy Citation.

Thanks for letting me and Randy take that car to the Prom, when it wasn’t so new, after we killed his dad’s car battery by listening to the Giants’ game on the Lebaron’s radio all afternoon while we detailed it. For the Prom.

Although, since my date to that 1983 Prom was Karen, maybe the Citation wasn’t so bad after all.

Thanks for lighting the fireworks on the Fourth of July.

Thanks for taking me to San Francisco Giant’s games.

Including Ed Halicki’s no-hitter in August of 1975.

Thanks for taking the San Mateo Bridge, making us drive up 101, so we, the boys, could always call out when we first saw Candlestick. George always winning, Dean not caring, me getting mad.

Thanks for taking us to an entire season of Modesto Reds games.

I don’t know how much baby-holding you did when we were little. Different times, different times. So – thanks for remaining calm when Karen and I handed a week-old Elizabeth to you.

Thanks for holding her.  So gentle.

Thanks for selling your 1963 Chevy Impala just before I was old enough to drive. I probably would have wrecked it and myself.

Thanks from all the people who came into Rogers Drugstore, people with questions, people who were intimidated by doctors, or nurses, thanks for taking the time to talk to them. Kindly. Cordially. As if their question was the most important question you’d field that day. Thanks for letting me see that courtesy, your unfeigned politeness.

Thanks for letting me discover the Saint books – lifted from the mass-market rack at Rogers – while I ate lunch at the back counter in the drugstore.

Thanks for driving me to San Jose to buy my first Nikon camera.

Thanks for not rubbing in my failure to catch that fly ball to right during the invitational tournament with the Roadrunners in 1977.

Thanks for not letting my grounding – from Karen – last more than a month. When I got grounded, senior year, for bringing donuts into physics class.

Why did I buy those donuts on the day of parents’ back-to-school night?

Thanks for driving us to Utah all those summers.

Thanks for starting in the middle of the night so we could sleep in the back of the wagon.

Thanks for letting Dean sing along, mile after mile, to Ride-along-cowboy. George and I would have shut him up.

I know – it was Rhinestone Cowboy. But not when Dean sang it.

Thanks for taking us to Hiawatha. For showing us your brother Dean’s graffiti scratched into a column of your school. For allowing me to take foundation stones from all that was left of your house.

Thanks for all the Hiawatha stories – stories about the Goose ratting you out, Papou catching you from behind when you were sure you could outrun him, all the Greek-town tales.

Thanks for not losing your cool when those hippies busted out the window of the wagon when we visited Yosemite.

Thanks for buying me those huge jawbreakers when you took us to Columbia.

Thanks, when I was three, for carrying me in Disneyland. Everywhere. When I refused to walk. Anywhere.

Thanks for agreeing to George’s request – the last time he flew home from Harvard – that we go well out of our way and drive up 101 through San Francisco so he could get the most dramatic effect, that view of the SF skyline, for his last trip home after graduation.

Thanks for not getting too mad when I inveigled all your boys to buy the same program that accompanied the Modesto premier of Star Wars at the Briggsmore Theatre.

Thanks for driving us to Christmas Tree Lane in Ceres.

Thanks for driving us to Sambo's after church.

Thanks for driving us to church.

Thanks for not buying that two-story house. Even though I cried when you didn’t. Your house has been the best house imaginable. Even when you demolished George’s bedroom to make a dining room.

Thanks for not demolishing my bedroom.

Thanks for patiently explaining to me that we were 100 miles from the ocean. No sharks in Modesto.

Thanks for being early every time we went to the airport.

Thanks for being early.

I’m sorry Tony-Time never rubbed off on me.

Thanks for letting Mom go with me to Greece for an entire summer.

Were you ever apart before that? No. No, you weren’t.

Thanks for having my Koumbaro John sign his name over the almost-hole he almost-slammed through the living-room wall the night the Greek dancing got a little spirited on Sherwood Avenue.

Thanks for all the Dad stuff you keep in the top drawers of your bureau. Pens, knives, matchbooks.

Thanks for always busting out the Metaxa when we had visitors. Like Pavvy. I think Pavvy appreciated it the most.

Thanks for using All Spice when I was a kid.

Thanks for always saying thank you when I bought you All Spice as a kid.

Or soap on a rope.

Thanks for pulling the covers as high as I indicated - chin, ear, or forehead - when you tucked me in.

Thanks for working so hard, for us, all your life

Thanks for driving Mom to our house on those Wednesdays when Karen and I needed you both to watch Elizabeth. And then Elizabeth and Kristina.

Thanks for being the best Papou ever.

Thanks for loving Mom, so much.

Thanks for being the best man I have ever known.

Thanks for being my dad.